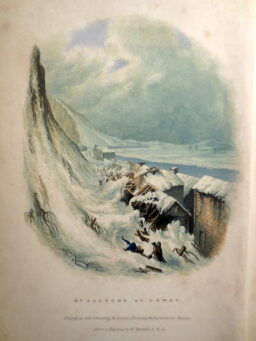 On the 27th December 1836 a huge wall of snow slipped off the Cliffe above Lewes, killing eight people. This unusual event was portrayed by local printer and inventor George Baxter in the image here.

At first glance it does not appear to be anything special but like The Avalanche itself it is a very remarkable thing. Baxter had recently invented colour printing and it was creating quite a stir. He was aiming for the lucrative trade in coloured images currently monopolised by hand-colouring. All over the country tens of thousands of children were hard at work, crudely daubing blue skies or smears of green on pastoral scenes. Children were cheap but no good for anything demanding accuracy such as the increasingly popular natural history books. Careful studies of plumage or fish scales had to be done by professional water-colourists and this was slower and much more expensive. Baxter achieved this soft, blended illustration by using oil-based inks and a different printing block for each colour, best seen here in the texture of the cliff and the realistic light in the clouds. In fact he used up to 20 different colours – but that, alas, was the problem.

His process was slow and he was a perfectionist. He and his work became well-known but he never made any real money. It was not until decades later, the 1860s in fact, that other developments in colour printing began to truly challenge the hand-colourists. By the end of the century the machines had won the day and it is unusual to find a book from the 1890s with hand-colouring. Baxter, like many visionaries, was simply ahead of his time.

But colour printing! Baxter won award after award and his prints were once very highly valued by collectors. They are are still popular today and you can find out more about him on this superb website. ‘Avalanche At Lewes’, by the way, was the 35th image he made.

George Baxter, 1837. First edition. The print appears as the frontispiece in a work titled 'Winter' by Robert Mudie

From Monk To Punk: The Man Who Missed The Sixties.