Sussex Books and Books in Sussex

Sussex books from around the county. The first one is a manuscript dating from the 1840s.

Sussex has always been popular with authors and indeed bookish types in general. Kipling’s fictional Pook Hill is in the east, Woolf and her Bloomsbury set squat firmly in the middle and modern thriller writers Peter Lovesey and Kate Mosse scheme and plot in Chichester. Over the centuries countless others have written thousands books about Sussex and this gives the county its own unique literary heritage.

There are still plenty of places to find antiquarian books in Sussex, from antique fairs to specialist dealers. Bookish towns include Lewes, which boasts one of the most lively and interesting book fairs in the country.

I frequently come across Sussex books when called out to buy and I’m always pleased to find them. They sell well at local book fairs and at the bigger fairs in London too. If you have any older ones to sell, please get in touch here.

Sussex On The Map 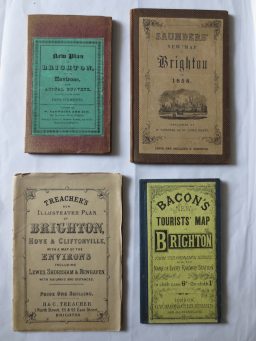 Brighton maps from 1840 to 1890. I love the attempt to make Cliftonville a distinct town of its own.

The map at the top of the page dates from the 1840s. The red line of the railway from Brighton to Lewes is complete but the branch line to Kemp Town is not yet built – and what a boon that would be if it still existed! Despite the title this is not, in fact, a map for walkers. It just happens to have been produced by J & C Walker, one of a series they made of all  counties. They are very attractive indeed and I particularly love the crude woodcut used for the blue paper label.

Maps tell a very intimate story of the development of towns. It’s great fun to use them to trace changes such as that Kemp Town branch line, old sea mills at Newhaven and the changing shape of Shoreham harbour. Many of the ancient pathways criss crossing the county are now subsumed by roads and I recently realised that humble Farm Road, on the Brighton and Hove border, features on all Brighton maps no matter how old they are. It is not always named; it was a path from the downs to the sea long before any human conceived of a farm.

East and West Sussex in Fact and Fiction

Sussex books in fiction and fact, both from the 1920s

The Great Brighton Mystery is just one of many thrillers set in the city, a tradition continued by Peter James today. I’ll feature some more soon in ‘A New Look At Old Books’. I love the dramatic teaser on the cover, although a more pertinent question might well be ‘How, then, did the cliffs move to the west of the city?

Life in A Sussex Windmill is just that, a delightful account of time spent living in Jack windmill above Clayton. It is long overdue for a re-issue. Edward Martin was a passionate antiquarian and geologist and spent much of his time investigating the dew ponds which dot the south downs. Do they fill naturally, with dew, or do they need topping up from other sources? There’s only one way to find out – so he and his son camp out by the pond at Ditchling beacon to catch the morning dew in action…

Further Afield In The South

Finally, a quick tour of a few other locations in Sussex. Tunbridge Wells is just over the border but James Richards, who created the fictional Cladpole family was a Sussex lad through and through. ‘Bout Me, or, My Ottybograffy’  is a wonderful book written entirely in the Sussex dialect. Did you know that it was almost certainly the basis of the southern American accent? It’s obvious when you read out the subtitle of his little book. The rather ugly dark green book is actually a great rarity: it is a ghost story, set in a thinly fictionalised Alfriston, and frankly not a patch on other Sussex horror stories served up the likes of Henry James and E F Benson. The Avalanche is a factual account of the tragedy at Lewes and was written by the doctor who was first on the scene. My favourite however has to be the Comic Brighton. That new visitor sloping into town, smoking something strange and with his shades glued to his eyes – in the 1880s! My how times have changed…

Sussex dialect, the Snow Drop, Brighton hipsters in sunglasses and an Alfriston ghost.

The Keep, as the name suggests, holds an un-rivalled collection of Sussex material.

Sussex Life magazine is always entertaining and often has excellent articles on Sussex in the past along with very strong photography.

Award winning website My Brighton And Hove is brilliant both for images and for the vast pool of collective knowledge from local experts. Well worth a visit.