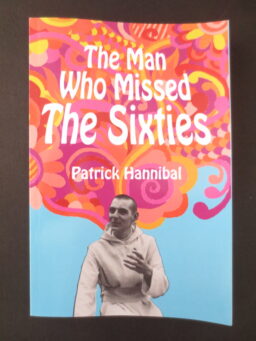 Last week I mentioned being out and about again, ‘meeting all sorts of interesting people.’ No sooner had I typed the words than the phone rang and I found myself speaking to one of the most interesting people on the planet, never mind Sussex.

Spooky? Patrick Hannibal wouldn’t think so. He’d put it down to a benign universe having a bit of mischievous fun. I went to see him a few days later and was immediately impressed with two things – his magnificent head of hair and his aura of calm contentment. He had a lot of old books concerning spiritual awareness and religious teaching from all faiths, but not one of them was as enlightening as his own work, ‘The Man Who Missed The Sixties.’

The title only tells half the story, but it’s all true. In 1963, still a teenager, he joined a Trappist Monastery and left in 1968, having barely spoken for all those years. He really did miss the sixties and in a delightful irony found everything the sixties was supposed to provide: inner peace, mindfulness, tolerance and wisdom. His contemporaries on the outside thought they could buy it in plastic products and packets of pills. They were chasing the moon – but as Patrick reveals in his book, those seeking true wisdom study the reflection of the moon in water, not the moon itself.

Mind you, he made up for it in the seventies. And the eighties. And the nineties. And… well, let’s just say the second half of the book, ‘From Monk To Punk,’ is a record of his descent to ‘normal’ life. He became a factory worker, a teacher and ultimately – to his ‘eternal shame’ – an OFSTED Inspector. The rest is the story of how he bounced back and regained that inner peace in the outer world. Every page contains a surprise, a pearl of wisdom and a question because questions, it seems, are answers in themselves. His gentle humour, self-depreciating wisdom and astonishing experiences make for a genuinely engaging read and I thoroughly recommend you buy a copy.

You can do that, and find out more about him, on his website here. The proceeds from the book go The Martlets Hospice and The Huntington’s Disease Association, by the way.

Brighton Lockdown Quiz: When Did Brighton Have Three Piers?
The Lewes Avalanche of 1836, Colour Printed by George Baxter.