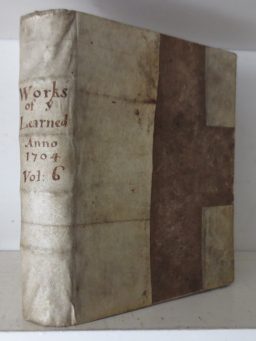 As you may have read recently the European Union are planning to restrict the import and export of any cultural artefact manufactured over 250 years ago. It includes art, maps, prints, ornaments, furniture, jewellery and of course that most ‘umble and affordable of all ancient relics: books.

In the world of antiques 1769 is not particularly old. Yet if the EU have their way – and I suspect they will – from January 1st 2019 it will all become un-saleable. The proposed new law is designed to stop the trade of ancient Aramaic manuscripts looted by terrorists in the middle east. In common with much other ill-considered legislation it is all-encompassing. So it includes European books, in all languages, published a mere 250 years ago. It’s like trying to cure Scandinavian alcoholism by banning tap-dancing in Kent.

Next year dealers will have to prove that a book published in, say, Athens in 1740 was originally exported legally. Not reassure, or declare, but prove, beyond doubt, to an untrained foreign customs official. Short of hopping into a time machine this is not possible. Not just tiresomely difficult but always, absolutely, literally impossible. No book dealer I have spoken to has ever seen a contemporary import/export document accompanying an old book and if it did exist it would be worth more than the book itself. 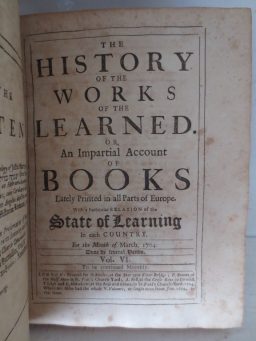 The World’s First Magazine about Books

No chit? No sale. The second-hand book trade, already on its knees, is about to be killed by careerist diplomats sitting smugly behind the security of the phrase ‘War on Terror’, which is somewhat ironic. Books were designed to be portable and indeed transportable. A great many books published before the arbitrary cut-off date are in Latin. It was the international language of intelligence. The text could be read by academics across Europe; the knowledge could then be re-translated and disseminated all over the world. The free trade in books built our continent, our culture, our institutions.

The book in the illustration is the perfect example. Titled The History of The Works of The Learned it is the world’s first magazine devoted to books. There are 12 monthly parts in this volume, each consisting solely of book reviews. With breath taking poignancy the title continues: An Impartial Account of Books Lately Printed in All Parts of Europe. Proof – were any needed – of the timeless exchange of ideas the EU are trying to shut down.

This has nothing to do with ‘Britain Against Europe.’ The story here is ‘Europe Against Europe.’ As Mehdi Hasan wisely said, the way to beat terrorism is not to be terrified. Bombs destroy business, yes, but only for a short time. This law will permanently close tens of thousands of galleries, antique-fairs, shops and internet dealers. The EU are doing the terrorists’ work for them; a few misguided diplomats colluding with ISIS to halt the European traditions of the free exchange of art, culture and knowledge.

And the final irony is that the law will not work. Sadly, those ancient manuscripts stolen from Syria are traded elsewhere in the middle east, outside EU jurisdiction. There is no market in Europe for fragments of un-readable parchment. There’s a wonderful, rich, ancient trade in art, culture and ideas, but what does that matter if a few EU officials get promoted for pretending to stand up to terrorists? ‘Business as usual’ is the way to win – not ‘business is bust’.

How To Pass The Driving Test; Or, Look out for that octopus!
Fonetik Spelin, Or, Reading is Fnu.