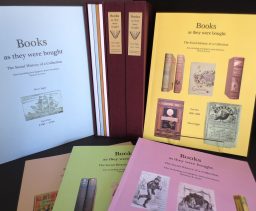 Books As They Were Bought is the very best guide to publishers’ bindings and I’m proud to sell copies at book fairs. Many people collect books in their original paper or cloth bindings and more and more universities are displaying their collections to the public. Now, for the first time, a detailed, readable and engaging guide is on the market. All 16 separate parts are written by Mavis Eggle and her knowledge and enthusiasm make them genuinely engaging as well as informative: ideal for beginners and fellow enthusiasts alike. Each part is profusely illustrated – indeed, they consist mainly of illustrations. The first part sets the scene and provides a background to the decades before 1800.  The next 15 parts cover a decade each and provide a fascinating look at the social history of books, newspapers, street literature, libraries and more. Along the way she examines the impact of technological, political and social developments on printing, publishing and the public. For example, trains led to commuting, which led to ‘an empty hour’ and a demand for something to read, which led to an explosion of lighter, shorter books designed to be read on the go. This led to railway bookstalls, all operated by the canny W. H. Smith, who pretty-well monopolise our railway stations to this day. Meanwhile, at home, cloth covered books were beginning to dress themselves in more and more gilt as publishers’ vied for the attention of customers. It was a shame to let these gleaming gold-covered books get damaged in the packing crates, so publishers began to cover each volume in paper… and the dust jacket was born. Fascinating connections like that make these quite simply the best guides on the market and it is hard to see how they could be surpassed for clarity, scope and usefulness.
They are available from my stand at book fairs where you will also find many examples of the books themselves along with Victorian magazines, newspapers, ephemera and more.

Each separate part of Books As They Were Bought is £20 each. The work is currently complete up to part ten, the 1880s, seen here in yellow. The slipcases, which display four parts apiece, are also £20 each.