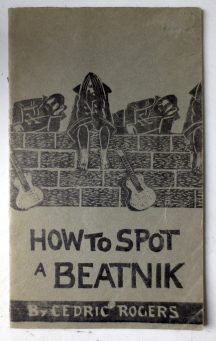 I love counter culture material and this apparently home made book is a jewel. How to Spot A Beatnik is set in ‘broadminded’ St. Ives and is a very amusing look at the hypocrisy of mainstream culture and its attitude to those who dare to be different. It is also a very rare little thing.

For the times they are a changin’. Specifically, the internet came along. Now any book can be traced in seconds. Many a laugh can be had on websites like abe, looking at twenty copies of the same book all described by old-fashioned dealers as ‘rare’, ‘hard to find’, or ‘uncommon.’ (Imagine them lined up on a real shelf rather than a virtual one and you’ll see what I mean.)

On the other hand a much more authentic way to establish rarity has evolved – a library search. COPAC, the Consortium of Online Public Access Catalogues, lists the entire contents of the UK’s biggest libraries. These days ‘not on COPAC ‘ is a genuine indicator of rarity. Worldcat, as the name suggests, goes one further.

Speaking of gems, Cedric Rogers later turned to rock collecting and pebble polishing. From one type of rock to another, you might say. Can you dig it?

Publisher not given - which I suspect is technically illegal, you rock 'n' roll rebel you, there's no date either but I should think it's about 1960. First edition. And only edition, too - interesting to speculate about how many copies he ran off. Rogers also produced the very attractive 'Cats of St. Ives,' a book I should very much like to own.