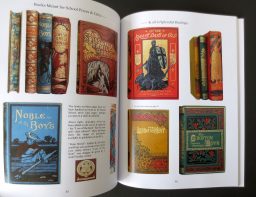 The 1880s was when the modern world began. Socialism, mechanisation and mass consumerism came of age, not necessarily in that order. And cheap books, published in their millions, flooded onto the market everywhere from railway platforms to Royal Galas. We can see a huge sample in Part Ten of Books As They were Bought. In its 96 pages Mavis Eggle traces the development of books, magazines, newspapers and ephemera throughout the 1880s. Of even more interest is the social history behind that story. Incredibly, the editor of the anti-religion newspaper ‘The Freethinker’ was sentenced to nine months for blasphemy; at the same time there were calls to ban penny dreadfuls with their routine tales of crime, murder, torture, cannibalism and other pastimes. Every aspect of a book from the daring diagonal cover designs to the colour pictures was changing rapidly and getting cheaper every day. In 1886 Cassell issued perfectly well made little books of excellent literature for 6d and 3d in paperback. There were colour magazines for 2d thanks to cheap, reliable colour printing. The world was bright, exciting and changing all the time and the progress is traced for us here through the medium that shaped it and documented it – print. Like the other parts it is indispensable to anyone interested in publishers bindings, social history or indeed the nineteenth century in general. The books are available on my stand at book fairs for £20 each, a slipcase – which takes four parts – is the same price. (You will also – ahem – find a great many examples of books, magazines, newspapers and ephemera from the period on sale too.) The series will continue into the 20th century and I’ll feature each new book as it released. In the meantime, I can heartily recommend this latest addition.